“Maybe it’s cos I’m watching the pipeline pro at the moment but this feels perfect for a winddown beer at the beach after a day getting fried in the sun.“ – ★★★★
Declan Byrne – triple j (AUS)

Lachie talks about the inspiration behind ‘Gunfight’:

“‘Gunfight’ is a song about mental battles in an ever-changing and uncertain world. Through COVID lockdowns, I constantly found myself living in a world where my profession no longer existed. I found that I was way less prepared for that than I thought I would be. The metaphor of the song is essentially about bringing a knife to a gunfight.”

To coincide with the release, the band have released a compelling music video – directed by Joel Ludemann. Shot in the delightful Megalong Valley Farm, the clip takes on the style from old Western films, as the band explains, “Lachie is a cowboy bandit on the run, having just ditched his gang ‘The Buff Boys’ and stolen their fortune. The rest of the band are ‘The Buff Boys’ on a manhunt for Lachie and the stolen cash. The climax takes place at an abandoned ranch that Lachie has been hiding out at. The boys engage in a gun fight. Lachie eventually appears to surrender, but has a knife held behind his back.”

In the live arena, Buffalo Paradise have sold out multiple headline performances, showcases their eclectic brand of indie-rock, featuring everything from kazoo solos to enthralling medleys. To launch ‘Gunfight’, the band will be playing a standalone launch party at Waywards in Sydney.

‘Gunfight’ will be available worldwide on Friday, April 29 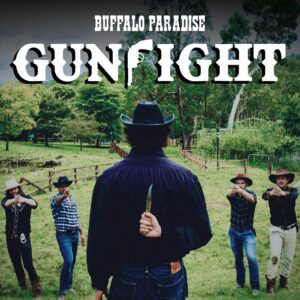