The Seattle native kicks off “Better Alone” by recounting moments from a doomed relationship. “My heart drops dead every time that I see her, run upstairs so I can get the picture clearer,” he sings over silky, reverb-laden guitar chords.“Maybe one day, suddenly, you will look up and notice me right there — but I’m too scared, maybe I’m better alone.” It’s the type of touching, heart-on-sleeve lyricism that fans have come to expect from Boone.

Regarding the track’s heartfelt tone, Boone explains it’s about the healing power of solitude. “I wrote this song about people who have relationship struggles, we all experience it from time to time,” he says. “Sometimes, when things aren’t working out it truly is better to be alone. Loving someone is so important but being independent and loving yourself is equally important.”

“Better Alone” follows the equally emotional “In The Stars,” upbeat anthem “ROOM FOR 2” and Boone’s international hit debut single “GHOST TOWN.” All four tracks will be featured on his forthcoming debut EP Walk Me Home…

The pop star recently performed “In The Stars” on The Late Late Show with James Corden and delivered a dazzling rendition of the song and “GHOST TOWN” in Norway — the country where he notched his first-ever #1 hit — in front of 50,000 screaming fans. In the US, “GHOST TOWN” became Boone’s first entry on the Billboard Hot 100 and entered Top 25 at both Top 40 and Hot AC radio, and has since been RIAA-certified Gold. 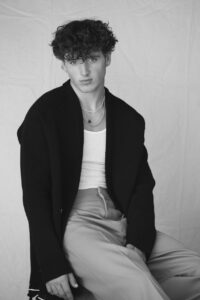 Discovered by Imagine Dragons superstar Dan Reynolds and signed to his Night Street Records in partnership with Warner Records, Boone has previously delivered stirring live renditions of “GHOST TOWN” on The Ellen DeGeneres Show, The Kelly Clarkson Show, and Late Night with Seth Meyers. He has garnered almost 500 million global streams to date, as well as praise from Billboard, who lauded his “restrained vocals” and Consequence, who dubbed the newcomer “an exciting new voice.”  With captivating singles like “GHOST TOWN,” “In The Stars,” and now “Better Alone,” Boone is already cementing his status as one of the most promising singer/songwriters in pop.