Stoke-On-Trent’s Black Coast are today revealing their a single and video ‘Vodka Smile’ – which can be accessed on all digital stores and streaming platforms here.

Vodka Smile’ explores a sentiment perhaps many can relate to, after vocalist Charlie Hewitt found himself coming to a personal realisation during the writing process of this song, saying that “Originally the song was written lyrically as a party song, that feeling of being so mangled you have no idea what’s going on. l always wanted a song like this – when l was in that frame of mind. It still scares me that l was so far gone and not accepting life itself for so long, l love the song don’t get me wrong but it takes me back to that lost feeling when we play it.”

Nuclear Blast’s Distribution arm ‘Blood Blast’ and Capital Artist Management (Yours Truly, Eat Your Heart Out, Between You & Me) have got behind the band, as have media around the world.

Kerrang’s Alex Baker said “I encourage you to listen to the latest song from Black Coast, the band from Stoke-On-Trent who started out life as a groove-laden metalcore band and have completely evolved. The new album Outworld is slated for release later this year, and through it the band explore a sound that more accurately defines them – get a taste of it with their tune Paradise.”

Wall of Sound praised the band’s diversity in sound – “What begins as a slower paced piece of alternative/rock music kinda turns a new leaf with the melodic guitars dialled right up, reminding us of grungey underground metal bands in the 2000s. Get to know these nu-rock upcomers!” 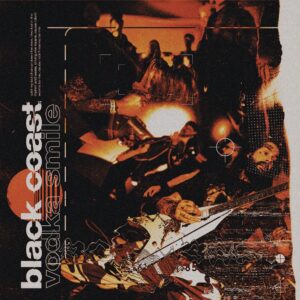