THAN EVER THE WORLD

Chugg Entertainment, Frontier Touring and Live Nation are thrilled to announce the return of US pop phenomenon Billie Eilish to Australia and New Zealand in September 2022!

On her fourth Antipodean visit, Eilish brings her hotly anticipated Happier Than Ever, The World Tour to arenas in Auckland, Sydney, Brisbane, Melbourne and Perth. It’ll be the singer’s first live dates in both countries since 2019, when she performed to frenzied, sold-out capacity crowds. The new shows come off the back of her #1 Album charting, critically acclaimed sophomore record Happier Than Ever – out now via Universal Music Australia. 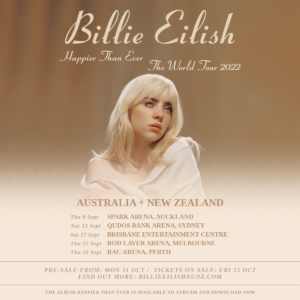 Eilish’s tour dates in North America, the UK and Europe sold out in record time back in May 2021. These Australia and New Zealand performances will be THE hottest shows of 2022!

It’s just gonna be crazy. It’s gonna be jumping and screaming and getting low… It’s gonna be so much fun. I cannot wait.’
– Billie Eilish, triple j, August 2021

Tickets to the General Public will go on sale Friday 15 October (timings staggered, see below) via billieeilishaunz.com.

In just four years, Billie Eilish has become one of the music industry’s greatest success stories, with an incredible 7 x GRAMMY wins and 10 x nominations. Her music has accumulated over 73 billion streams globally and 1.6 billion streams in Australia alone.

2021 has already been quite the year for the 19-year-old: single ‘Your Power’ debuted at #10 on the Billboard Hot 100, accruing more than 150 million streams in the first two weeks of release. In March, she took home 2 x GRAMMYs: Record of the Year for ‘everything i wanted’ and Best Song Written For Visual Media’ for her James Bond theme ‘No Time To Die’. In February, the ground-breaking documentary Billie Eilish: The World’s A Little Blurry premiered on Apple TV and chronicled Billie’s journey through the writing, recording and touring of her 2019 debut album, WHEN WE ALL FALL ASLEEP, WHERE DO WE GO?. In May, Eilish made her book debut with BILLIE EILISH, a stunning visual journey featuring hundreds of never-before-seen photos, offering readers a personal glimpse into her childhood and her life on tour.

Debuting at #1 on Album Charts worldwide in July 2021, new album Happier Than Ever… “fully establishes Eilish as one of her generation’s most significant pop artists”, wrote NMEin their 5-star review. Rolling Stone called it “heroically honest”, while DIY Mag noted it’s “not just a triumph in progressing a signature sound into new territories, but a lesson in how to own your reality with confidence and class.” Closer to home, triple j touted the album’s title track as “a stunner that’s possibly Billie’s strongest performance to date”, with the Sydney Morning Herald calling the album a “revealing and rewarding, listening experience”.

Weaving razor-sharp wit, everyday observations, secrets and escapades, Happier Than Ever explores what it means to be a complex human being, navigating the modern world. Eilish has delivered her rawest, most confessionary work to date.

One of the most crucial pop artists of our time, on September 3 this year Eilish made her Disney+ debut with Happier Than Ever: A Love Letter to Los Angeles – a cinematic concert experience, filmed on the stage of the legendary Hollywood Bowl and featuring an intimate performance of every song on Happier Than Ever in sequential order, performed for the first and only time.

On her Happier Than Ever, The World Tour, Eilish will continue her work with sustainability partner REVERB, with the fan-facing Billie Eilish Action Village at each show. It will focus on climate action and climate justice, hosting and supporting local and global environmental organizations as well as a comprehensive program via REVERB’s Music Climate Revolution campaign. In addition to reducing the tour’s environmental footprint, the initiative will support projects that directly and measurably eliminate greenhouse gases. These collective efforts will make the tour Climate Positive; eliminating significantly more emissions than the tour creates.

ABOUT BILLIE EILISH
With the release of her second album Happier Than Ever, Billie Eilish – the 19-year-old Los Angeles native – remains one of the biggest stars to emerge in the 21st century. Since the release of her debut single ‘ocean eyes’ in 2015, Eilish continues to shatter the ceiling of music with her genre-defying sound. Fast forward from her humble breakout, her album WHEN WE ALL FALL ASLEEP, WHERE DO WE GO? debuted at #1 on the Billboard 200 in the USA, as well as 17 additional countries around the world upon release in 2019, and was the most streamed album of that year.
WHEN WE ALL FALL ASLEEP, WHERE DO WE GO? was written, produced and recorded entirely by Billie Eilish and brother FINNEAS in their childhood home of Los Angeles. Billie Eilish went on to make history as the youngest artist to receive nominations and win in all the major categories at the 62nd GRAMMY® Awards, receiving an award for Best New Artist, Album of the Year, Record of the Year, Song of the Year, and Best Pop Vocal Album. Billie Eilish is also the youngest artist to write and record an official James Bond theme song, ‘No Time To Die.’ Most recently, Billie Eilish was nominated for four additional awards at the 63rd Annual GRAMMY Awards in 2021 and took home both Record of the Year for ’everything i wanted,’ and Best Song Written For Visual Media for ’No Time To Die’. Billie Eilish’s latest album Happier Than Ever was written by Billie and her brother FINNEAS, who also produced the album.
BILLIE EILISH
HAPPIER THAN EVER, THE WORLD TOUR
AUSTRALIA & NEW ZEALAND
SEPTEMBER 2022Presented by Chugg Entertainment, Frontier Touring & Live Nationbillieeilishaunz.com
TELSTRA PLUS PRE-SALE (AU)
via Telstra.com/Music
Runs 48 hours from: Monday 11 October
or until pre-sale allocation exhausted
Pre-sale timings staggered per show, visit website for more details

ALL SHOWS ALL AGES