Melbourne-based artist Annabel Kilpatrick has navigated pivotal moments in life, from changing her path as a visual artist and having to re-learn how to sing after a major bike accident, to become a multi-instrumentalist producer and engineer releasing her first solo project, Bel Kil.

Bel Kil’s debut single ‘Escaping’, sounds like summer – if a song could sound like melting ice-creams, blue skies, and spontaneous road trips to the beach. ‘Escaping’ is rich in detail, with catchy whistles and percussive finger snaps that blend flawlessly with cinematic synths and earnest vocals. You can even hear a sample of Bel’s Uncle David, who has a great Mick Jagger-esque voice, embedded in the chorus.

The track is the first taste from Bel’s forthcoming EP ‘My Year’, originally written on guitar when Bel was about 18, wanting to escape the challenges of youth. Later studying Music Production at Collarts University, Bel took what she learned through her studies to produce and mix the single in her bedroom during lockdown. Bel recorded all the elements of the track and in some cases overdubbed parts at a later stage. She didn’t have access to a bass while mixing ‘Escaping’ so she re-pitched her guitar to record the bass line, later blending it with a real bass.

While Bel has always been an artist, music was not her first craft. Originally excelling as a visual artist where her glass works were featured at the acclaimed International Art Fair SOFA and in seminal publication CAST: Art and Objects, it was during a period of mentoring that her priorities shifted. Her light-bulb moment occurred when she found herself daydreaming about being in a recording studio during a careers lecture while her bored students twiddled their thumbs.

The lecture wasn’t meant for her, and they were words Bel had heard countless times before, but it was in this instance that she felt compelled to change her pathway. She enrolled into Collarts and her music career really began. Her initial intention was to become a sound engineer and produce music for others, but a major bike accident changed her path again. While riding home from University a passenger in a moving car opened the door in the bike lane, hitting Bel. Damage to the vagus nerve meant Bel had to teach herself to use the right side of her body and re-learn how to sing.

“The accident made me slow down and appreciate life, realising how lucky I was. It also gave me the confidence to really believe in myself and my music – not compare myself to others and where they are at in life.”

It was at this point that Bel decided to focus on own songs, not just the music of others.

The visuals accompanying the single capture the freedom and nostalgia that Bel explores in her music. Bel stumbled across a stash of sun-bleached family photos of her mum growing up in Portland in the 70s, as well as images from her own childhood of kids in oversized costumes, playing with yabbies, and climbing over rock pools. Photographer Claudia Sangiorgi Dalimore helped her recreate this nostalgic summer feel with a photoshoot at Half Moon Bay. Claudio also captured video footage on Super 8 film for Bel to intertwine with family videos Bel discovered, dating all the way back to the 30s.

“Whenever I write I seem to recall events or memories in a sunny or balmy weather scenario, even if I’m reflecting on a sad experience or event.”

“I didn’t want to shoot something that felt foreign to me, dishonest or unnatural, so I guess we were forced into coming up with an alternative that felt so fitting and authentic.”

You can catch Bel live with her band at the LeadBeater on Saturday the 6th of August with the lineup to be announced soon. Her EP arrives later this year and you will be hearing a lot more from Bel with an album already in the works. 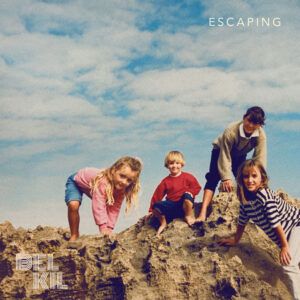