BEING AS AN OCEAN

Californian melodic hardcore outfit Being As An Ocean will make their long awaited return to Australian shores this August to celebrate the 10th anniversary of debut album ‘Dear G-d…’ and they’ll be joined by Stepson and Bloom.

“We are elated to announce that we will be heading back out onto the road in August 2022 to celebrate Dear G-d… ‘s 10 year anniversary,” says the band.

“We will be playing the greater part of Dear G-d…, including songs we have yet to perform live and a mix of fan favorites spanning the band’s career. We know these performances will be something special and can’t wait to see you all again. Here’s to 10 years and the future ahead.”

Releasing in 2012, ‘Dear G-d...’ is Being As An Ocean’s first album and is a visceral and memorable album for many, delving into a sonic landscape littered with stories of strength from weakness and the beauty in tragedy.

Voracious devourers of music new and old, Being As An Ocean taps into a deeper well of inspiration. Those weaned on genre-giants like Underoath and mewithoutyou readily identify with what BAAO is all about. Fans of like-minded artisans La Dispute, Touché Amore, and Defeater also support the cause. As they evolve, Being As An Ocean looks further outside, to iconic greats like The Beatles and Queen, if not so much in sound then in spirit and celebratory vision.

Brisbane melodic hardcore monsters, Stepson, take their place as main support on the ‘Dear G-d…‘ 10 year anniversary tour. The band has sold out headline shows around Australia as well as supporting acts such as Polaris, In Hearts Wake, Northlane, I Prevail, While She Sleeps, Counterparts and Stray From The Path. Stepson’s debut album ‘Help Me, Help You‘ was released in 2020 via SharpTone Records which debuted at No. 13 on the Australian ARIA Album charts and was named The Triffid Album Of The Year.

Fierce Sydneysider’s Bloom also join in on the fun, taking the second support slot across the nation. Teaming up with Greyscale Records to release their wildly successful ‘In Passing’ EP, Bloom carved their place in the Australian alternative music space and have since jumped from strength to strength. The band currently find themselves on their first ever major city headline tour, in support of their recent single “Sink Into The Soil“.

Join Being As An Ocean in celebrating their 10 year debut album milestone in intimate venues across the country. Tickets on sale Thursday April 7 at 5pm local time via Destroy All Lines. 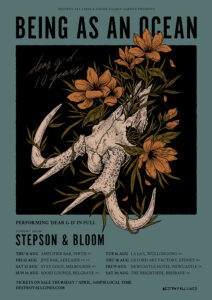