Bearings have announced a cover of the massive Harry Styles song, Golden and will feature on the release of a deluxe version of their Courtney Ballard (Good Charlotte, Waterparks produced album, Hello, It’s You, out 15 September through Pure Noise Records.

“We’ve been massive fans of Harry Styles for a long time now and have always wanted to do a proper cover. When the idea came up it was a no brainer. It was so much fun to record and we truly learned a lot just by doing it. To have our good friend Ryan Woods on the track just made it that much better. We’re so excited for people to hear this one” – Ryan Culligan

“Making these songs was sort of throwing it back to where we started.” says Dougie Cousins (singer). “All of us in a room recording music and having beers. Guitars, bass, drums and a bit of singing. Had to remind people we can still rock.”

Guitarist Ryan Fitz continues “Recording these songs was a really different process than any way we’ve ever created music for Bearings before. It was probably the most “DIY” recording process we’ve done in our professional career as a band. Everyone came down to where I live in Hamilton, and we self-recorded all songs in 5 days in a really nice (but small) studio I work out of here. This was the first time we had been together, even just as friends in a long time because of how many lockdown and stay at home orders we kept having in Ontario. I think it really shines through that we were having a fun time recording and arranging these songs and “Need” especially shows a more honest and dream rock sound that we’ve never really approached before. It felt really great to just be working on music together again”

Hello, It’s You deluxe is now available for pre-save now 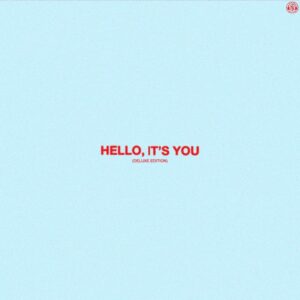 The album follows 2018’s Blue In The Dark (hailed by Alternative Press as one of the year’s best) and finds Bearings both deepening and widening their sonic palette: There’s a sharpened take on the classic pop-punk vibe the Ontario, Canada-based quintet – Cousins, guitarists Ryan Culligan and Ryan Fitz, bassist Collin Hanes, and drummer Mike McKerracher – have traded in since forming in 2014, the same mix of ebullient energy and undeniable melodies that have earned them respect and tour invitations from both new-school heavyweights like State Champs and legends like Less Than Jake.

While the world outside is certainly anything but sensical these days, Cousins and his bandmates have worked to mine their mixed emotions on their sophomore full-length.