BACK IN TIME WITH NEW

Melbourne alternative trio BEACH PANIC! are paying tribute to a story as old as time with their crooning new ballad, “Kindred”. “Kindred” leads the way for their forthcoming ‘ICE CREAM TAMBOURINE’ EP full of early rock and roll soundscapes plucked straight from the late 60s.

“Kindred” explores the fear and vulnerability of falling in love with someone, and sonically showcases exactly what BEACH PANIC! are all about. Produced mixed and mastered by the band themselves, the trio place emphasis on their DIY ethic when it comes to their music. “We wanted to hone in the sound of BEACH PANIC! on our more classic influences of the late 50s and 60s, tapping into the original brash and bold attitude of early rock and roll, like Elvis Presley or The Beatles, mixed with the sound and textures of later surf-rock,” explains the band. “Kindred wears it’s heart on its sleeve as it asks to put its ring on your finger.”

The “Kindred” music video premiered yesterday via TheMusic, who described the single as “a surfy, west coast synth tune dripping with nostalgia.”

The video is an additional DIY venture, taking influence from classic visuals pulled from the mid 20th century. The video’s contrast of light and dark represents the balance of good and bad, and the need for both in order to truly appreciate something beautiful. “Taking on the motifs of the yesteryears, we did a lot of research into old school Hollywood film making, especially the lighting and set design to create a video that looks and feels like a well polished emotional performance plucked straight out of the late 60’s.”

The trio share a love for the charm and quirks of music from the 50s and 60s. The free loving, heart-on-your-sleeve themes mixed with hip shaking grooves is exactly what the members strive to bring together, and these elements have since become integral to the project.With the boys emotive punk rock upbringing and Yannica’s love for vintage style, the amalgamation of their hard hitting energy and groovy fashion sense makes BEACH PANIC! loud and confident. Together the band has created a special blend of tongue-in-cheek surf-pop rock music that bounces between being unabashedly honest and utterly rambunctious.
“Kindred” is available now to stream and purchase everywhere. ‘ICE CREAM TAMBOURINE’ will be available Friday August 13.
Beach Panic! single ‘Kindred’ out now. Official single artwork below 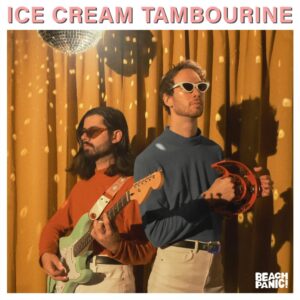