With Tegan and Sara

Beach Bunny have released a new version of their single ‘Cloud 9’, joined by Tegan and Sara. The platinum-selling duo joins the Chicago-based band for a punchy new spin on the track, with updated lyrics to include gender neutral and feminine pronouns.

Tegan and Sara say, “We’re massive fans of Beach Bunny, and when we heard ‘Cloud 9’ for the first time fell in love with the brilliant lyrics and addictive melody. We love that Lili was up to let us experiment with changing the pronoun in the chorus to she. The efforts made to make the song relatable to everyone, isn’t just about inclusivity, we think it’s a great indication of the flexibility and creative spirit of the band at its core!”

This month, ‘Cloud 9’, which was released on Beach Bunny’s 2020 debut LP Honeymoon, has re-emerged, thanks to a new viral TikTok trend featuring the song. The song is earning more than 3 million streams per day, now with over 78 million total streams. On TikTok, there have been more than 1.3 million videos created using the song. Last week, the song reached #86 on the Spotify chart and #7 on the Spotify Viral chart. In the US, it’s #15 on the Billboard Hot Alt Songs chart, #10 on the Rolling Stone Trending 25 chart, and #5 most-added at Alternative Radio.

Beach Bunny capped off 2020 gracing many Best Albums Of The Year lists for Honeymoon, including from The New York Times, Rolling Stone, LA Times, and Consequence of Sound. Earlier this year, the band released the four track EP Blame Game, which led to their late night TV debut on Jimmy Kimmel Live! performing ‘Good Girls (Don’t Get Used)’. The EP received praise from The New York Times, Entertainment Weekly, Stereogum and The FADER, marking the start of another banner year for the Chicago natives. 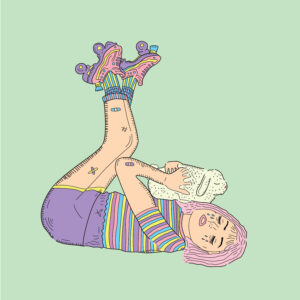