BAIO RELEASES TWO MASSIVE SINGLES  “ENDLESS ME, ENDLESSLY” + “WHAT DO YOU SAY WHEN I’M NOT THERE?”

Synth-pop master BAIO returns with two new mega singles, “Endless Me, Endlessly” and “What Do You Say When I’m Not There?” are both out today, ahead of his upcoming third studio album. Littered with rich vocals and carefully crafted layers, BAIO continues to show off his musical repertoire ahead of his third studio album set for release in early 2021.

The tracks parallel each other in a sense – exploring a sort of duality of the enduring power of connection that many of us desire, and the struggles of not knowing how others truly feel. BAIO masterfully fuels both tracks with funky beats infused with electronic elements, perfectly complementing the heartfelt, storytelling qualities embedded within the lyrics.

“Endless Me, Endlessly” is a simple song about being there in every possible capacity for someone else. Through hard times just as much as good times. In a way, it’s a bit of a fantasy – a single person cannot be everything to someone else. Lately, though, I have found fantasy to be a thing of comfort.

“What Do You Say When I’m Not There?” is the polar opposite emotionally. It’s an ode to insecurity and the fact that you can never truly know what is going on in someone else’s mind. With this song I tried to strike a pointed contrast between melancholy lyrics and an upbeat, sunny energy.

BAIO is the solo project of Chris Baio, who has been the bassist in American rock band Vampire Weekend since 2006. The band has seen great success receiving 2 GRAMMY awards and was the first act to have three No. 1 albums debut on the Billboard Charts.

Having embarked on his solo journey in early 2012, with his first EP release “Sunburn,” BAIO was infused with inspiration from electronic and dance music, displaying Chris’ DJ talents. Since then, he has released two studio albums, “The Names” in 2015 and “Man of The World” in 2017. Both albums received widespread praise for their skillful production and multifaceted musical depth.

“Endless Me, Endlessly” + “What Do You Say When I’m Not There?”
are both available now on all streaming services. 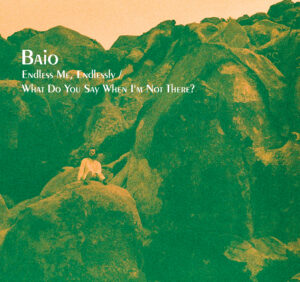