‘Shout Into The Noise’

‘I Want You To Know’

Ash Grunwald is back, delivering his most personal album yet with Shout Into The Noise, due for release on 21 January 2022. Today he shares the album’s lead single, ‘I Want You To Know’.

Written for Ash’s children, Sunny and Aria, ‘I Want You To Know’ is a deeply personal song. Ash says, “I wanted to let them know why I’m away, why I am who I am and that I’m missing them. We went to a place emotionally that I hadn’t explored in my songwriting before. It’s a much more tender side of me. I was really nervous to start doing this song at gigs because it’s quite different to my bluesy stuff, but my audience has been super kind. They always feel touched by the genuine sentiment. This begs the question: why didn’t I open up earlier?”

WATCH: Ash Grunwald – ‘I Want You To Know’

Shout Into The Noise, Ash’s eleventh studio album, sees him challenge himself and push into new territory, crafting the finest album of his career. The album was produced by Grammy-nominated songwriter and producer Lachlan Bostock (Mansionair).

“I embarked on a mission to write with younger writers and producers,” Ash says. “I’ve spent much of my career tipping my hat to those who have gone before.  Maybe it was time to learn from the younger generation and find a new sound that blends the two worlds. An irony that I only realised after the fact is that this is actually my most personal songwriting I’ve ever done. These amazing songwriters unlocked something for me.”

Shout Into The Noise is the start of a new chapter for Ash Grunwald. “This album is my resolution to myself that I am releasing any constraints on who I am or what I’m capable of.” 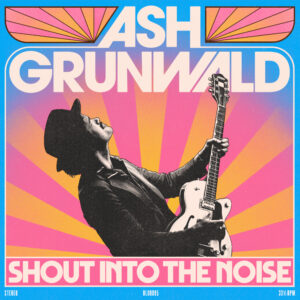 Shout Into The Noise tracklisting: