‘IN THE EYE OF THE STORM’

Arch Enemy’s founder and chief songwriter Michael Amott comments: “In The Eye Of The Storm is a song that was built around a hypnotizing riff and a groove that’s just screaming out to be played live! Shooting the video in Berlin, Germany with, for us, new director Mirko Witzki was a super cool experience, and the result is nothing less than astonishing!”

To hear more from Deceivers, plus pre-order the album, visit https://archenemy.lnk.to/Deceivers where the record is available in a variety of formats, including: digital album, limited deluxe 2LP and CD artbook, limited deluxe CD box set, limited black and coloured 180g LP and special edition CD.

A collection of 11 tracks that are ruthlessly catchy and mercilessly violent, Deceivers stands toe-to-toe with the highlights of the band’s storied catalogue. Roaring to life with Handshake With Hell, Arch Enemy make it clear they are out for blood, and every track is a hit, from the moody Poisoned Arrow to the titanically anthemic One Last Time. Sounding more energized than ever, the quintet is operating at the highest level, delivering a maelstrom of diamond-hard riffing wrapped around cinematic melodies, thunderous drumming and towering vocals. Arch Enemy has proved, yet again, that they are unstoppable.

DECEIVERS TRACK LISTING:01. Handshake With Hell02. Deceiver, Deceiver03. In The Eye Of The Storm04. The Watcher05. Poisoned Arrow06. Sunset Over The Empire07. House Of Mirrors08. Spreading Black Wings09. Mourning Star10. One Last Time11. Exiled From Earth 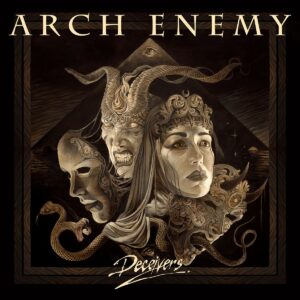