AN ODE TO THE LIVE MUSIC

Australian photographer David Herington shares his new zine, Stage Right. An ode to the live music scene, the book contains photographs and stories from the regional-based photographer and tour manager/guitar tech including behind the scenes, never seen photographs of Skegss, Dune Rats, DZ Deathrays, and more.

Figuring that concerts were already being photographed by lots of photographers in pits all around the world, Herington wanted to capture a side of touring that wasn’t seen as often but makes up a large portion of a bands time on the road – the driving, the waiting, and the ups and downs of touring that are often left undocumented.

The book contains the last live photograph taken at a DZ Deathrays show in Australia before the restrictions were in place. Herington shares, “When physical distancing put a pause on live music it was a very strange feeling. There is a photograph of DZ Deathrays in the zine that shows the drummer, Simon, standing on his kick drum and waving goodbye to the audience. This was in Canberra on March 13, 2020, and we were supposed to be at a festival in Sydney the following day but that was canceled due to COVID-19 concerns. The photograph is poignant for me because it was the last time any of us were able to do what we love and the wave goodbye feels fitting.”

Detailing some of the darker and more humorous sides of touring through diary entries throughout the book, Herington shares stories of assault rifles in mysterious Slovakian vans to blood-stained hotel rooms and on-stage vomit buckets whilst also reminiscing on the sweeter side of touring. He shares, “I think the biggest lesson I have gained while touring is regardless of where people are from and what their situation is, music has the ability to bring people together in a very special way.”

Front cover taken of Shane Parsons of DZ Deathrays at The Tivoli, Brisbane (2019) 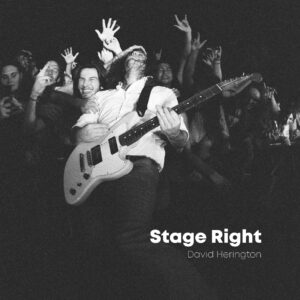