Sydney-via-Adelaide alt-pop artist Sarah Saint James has today unveiled a live session of her viral TikTok hit ‘mad at god’, recorded against a dreamy blue sky projection in a Melbourne backyard during a recent writing trip.

This intimate rework of her breakthrough track provides a snapshot into Sarah’s heart-wrenching mindset as a teenager, who at age 15 had spent half of her life bullied for her weight and sexuality. With pared-back production, Sarah’s vocals take centre-stage and invite vulnerability as she reflects on that time in her life; trapped in an unsupportive environment that stacked the odds against her because she wasn’t who other people expected her to be. ‘mad at god’ revisits the depth of her desperation at the time, “I swear to God, I know that this might hurt but I promise it’s your fault.” Sarah contemplated suicide to spite God for not helping her, even though she prayed every night that she would wake up skinny and straight, and find somewhere she belonged, “I never go to parties, cause I never get invited, but I never ever make new friends.”

After reaching near-rock bottom last year, the story and success of ‘mad at god’ is kismet. “It’s always the moment that people give up… that’s when the big break happens.” With the world pausing in 2020, Sarah lost her part time job in Sydney and was faced with the potential reality of having to move back in with her mum in Adelaide. To leave ‘the big city’ felt like failure and a return to her turbulent old life. Sarah decided to make the most of her remaining time in Sydney, and wrote ‘mad at god’ on FaceTime with her friend Bri Clark. On a whim, she shared the chorus from an unfinished demo of the song on TikTok and it immediately resonated with people around the world – she woke up to hundreds of videos of people telling their stories, crying in their cars and singing along to what has become an alt-pop anthem for all outsiders and misfits, reaching 430,000 views within two weeks.

Seeing people react to her songwriting so deeply, the aftermath of ‘mad at god’ has seen Sarah fully commit to giving her childhood dream of being a performer her everything. The music isn’t about her anymore, it’s about giving a voice to those who feel as lonely and outcast as she did. Sarah leads as a fierce example for those who don’t yet know how to be themselves, creating hope and uniting a community to make it through together. “I want people to take the stories of my life and songs into their own lives and feel empowered and excited. It felt impossible for me at the time, but I know now that life really does get better.”

‘mad at god’ was officially released in late January and produced by Nat Sherwood. It has received airplay on The Edge 96.1, KIIS 106.5 and triple j, as well as community stations FBi Radio and Radio Adelaide. The track has gone on to amass 2 million streams and 1.5 million+ views from user generated content, with Sarah building a community of 35,000 social media followers around her. Her monthly Spotify listeners exceed an audience of 31,450 while her daily Apple Music listeners average 500. 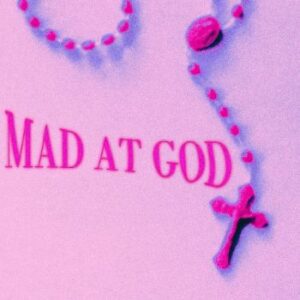