In an opposite fashion to Alera’s prior cryptic releases, “Hirudo” surprise premiered on Triple M Hard N Heavy on Tuesday night. Produced by Christopher Vernon (Belle Haven, Better Half), the new track is a short burst of hardcore energy, taking inspiration from the likes of hardcore leaders, Counterparts, Gideon and Defeater.

“Hirudo” (Meaning ‘Leech’ in latin) is about being in love with a person that is only interested in taking. The band delve deeper to explain, “across its short runtime, a story is told from the perspective of the giver in this relationship after ending things. Ridden with bitterness and remorse, the song closes with a cautionary warning for the listener – beware the snake.”

Having already clocked tens of thousands of streams on its singles, Alera’s forthcoming ‘Beware The Snake‘ EP has enabled Alera to develop a narrative as well as a community around their conceptual art in a way that is redefining how music is able to tell a story. There is a rich and immersive experience the viewer is invited to enter through cryptic puzzles and the mysterious Covenant which acts as a backdrop to this band’s melodic, anthemic, and at times chaotic music.

To celebrate the release of their debut, Alera have announced they’ll take to the stage December 16 at Melbourne’s Workers Club alongside fellow Victorian’s The Motion Below, In Vanity and Some Heard Trouble to officially live launch their explosive brand of melodic hardcore.

Releasing off the back of their cryptic campaign for their first single, “Failure; An Anecdote for Expectations“, Alera have amassed a cult-like following. Launching under the guise of The Covenant at inception, Alera directed curiosity to a Discord server in which members interactively unravelled the puzzles Alera offered.

At the release of their acoustic rendition of “Failure…”, the band posted a link in the YouTube description which began another search. Hysteria Mag seeked to uncover its meaning, discovering the pre-save information for previous single “Bleak“. Alera have made their way onto the airwaves with triple j Unearthed TOPs, Triple M Hard N Heavy and repeat play on triple j’s Short. Fast. Loud. Spotify welcomed Alera with an add to Homegrown + Heavy while Wall Of Sound suggest Alera: “are set to become Australia’s newest breakout act in emo/post-hardcore”.

“Hirudo“, “SMS“, “Bleak“, and “Failure; An Anecdote for Expectations” are available to stream everywhere now. ‘Beware The Snake’  EP is out now. 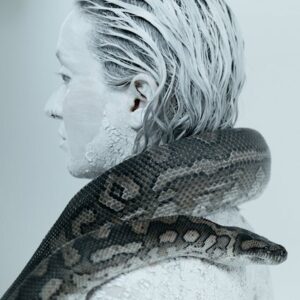 THURSDAY 16 DECEMBER – THE WORKERS CLUB, MELBOURNEW/ THE MOTION BELOW, IN VANITY + SOME HEARD TROUBLE
TICKETS 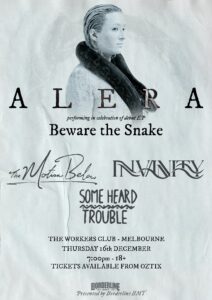