Over the past four years, the clubs and venues of Brisbane have witnessed the upbeat, interactive musical performance from Aerborn. Born in Brisbane, Australia, she is known for her energising dance music production and enchanting, delicate vocals.

After seven years in the making, Aerborn has created her debut album Peace.
It is a culmination of her findings since working in the industry, and holds messages of self awareness, current global issues, world peace, and self healing.

The tracks share Aerborn’s introspection from her personal experiences, and realisations of her impact on others and the Earth. She believes music is crucial for health and peace of mind. Aerborn wants to make a difference and a positive impact with her songs, as music has healed and inspired her all of her life.

“I have carefully chosen words that will spark a light within the listener, and will grow new brain pathways. The entire brain reacts to music, and we are very susceptible to the lyrics on the radio influencing our behaviours and our lives. I hope to hold my audience and guide them with my songs; so they feel like they are getting advice from a good friend who cares about them. All my cool epiphanies about life often end up as my songs.” Aerborn explains.

She began the project ‘Aerborn’ in 2014, teaching herself how to use production programs and recording straight into her laptop microphone. By 2017 she had released her first single ‘Smokers and Jokers’ that now has over 360,000 streams on Spotify. In 2018 she won the Innovation Award at Brisbane’s ‘Cube Effect’, and played events including ‘Valley Fiesta’, and supported Sarah Blasko at ‘The Tivoli’.

Peace is an anthem of positive change, and Aerborn believes if someone wants to see change in the world it has to begin inside of themselves first. Her dream is to spread a message of self love, deep connection, and heal her listeners by tapping into the ancient craft and rejuvenating power of music.

“Music changes my mood the instant I put it on. It’s one of the most powerful forces in this world, and it impacts us whether we realise it or not. I really hope I have left something positive in the world, and my music can help awaken people to their own greatness.”

Empowering, inspiring, energised, Peace promises to be 10 supercharged tracks that will take you to the mysteries and wonders of far away galaxies and back! 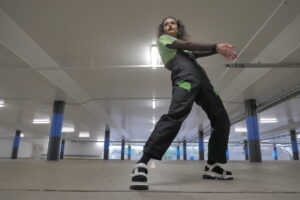 STAY CONNECTED WITH BLACK  OF HEARTS