Sheph.ART & Barry Saleh are no strangers to smooth melodies, crisp beats and immaculate vibes. The two producers have steadily made a name for themselves in Liverpool, Sydney producing a multitude of talented acts out of their studio, including A.Girl, Youngn Lipz, Pistol Pete, Billymaree, JKing & more. This work has been featured globally, landing coverage across Red Bull, triple j & AU Dollars, as well as scoring 10 million+ streams across their production credits. Combining for ‘Action’, the two talented young hit-makers are bringing to audiences their debut offering as artists in their own right. Working out of the very same studio, the producers channel influences from J.Cole, Kanye, Brent Faiyaz & The Weeknd into a track that allows them to showcase their versatility and talent as producers, songwriters & now performers as well.

“Let ‘em see my actions speak, Imma let ‘em see my actions speak” sings Sheph.ART. ‘Action’ takes adversity and let down, channeling it into a smooth & defiant track of self-actualisation. Not allowing naysayers to define them, Barry Saleh & Sheph.ART are articulate and poignant in their resistance to those who try to take advantage of them. The two powerhouses control their venom into a sultry and polished track that clears their minds and positions the pair as the cool & calm beat-slingers of Australian hip-hop; fresh to the stage, but ready to rise rapidly.

“Action’ is a reference to the people who have doubted my musical, creative and business abilities, always being nowhere to be found when crunch time was imminent and now would like a seat at the table to bear the fruits of my labor. I specifically made the production as gritty as possible without losing its melodic essence in order to take the listener through an emotional rollercoaster to feel the hunger that I felt going through the motions of being able to get to where I am today and looking to go forward from here.” Sheph.ART

“Although the beat and the main vocals can sound upfront and in your face, the listener has the option to listen a little more in depth and find that there is a flow of movement in the record. The inspiration of the lyrics came from being turned down by someone who showcased believing in my vision and abilities. This made me realize that there are so many artists just like myself who go through the pain of rejection and I would like to be the voice on their behalf to showcase that their hustle for their growth does not go unnoticed.”  Sheph.ART 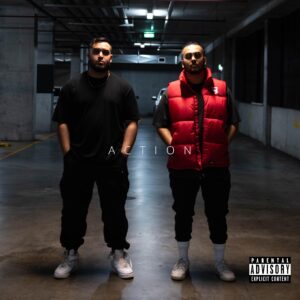 Incorporating physical symbols, representing the themes of their individual verses, Sheph.ART & Barry Saleh both wanted to be direct and forthright in the visual accompaniment for ‘Action’. Shot in a sparse backyard, similar to those seen across Western Sydney, the two rappers are able to revel in the growth they’ve needed to show, to land them in the position they are today. ‘Action’ closes with the two gazing into the inferno, reflecting on their past & planning for their future – driven to succeed.

“As a debut, we wanted the music video to represent our themes of the record in a way that was able to be relatable to our audience. In Australia, we are surrounded by bushland, campfires and BBQ and we wanted to incorporate this theme in the video.” Sheph.ART 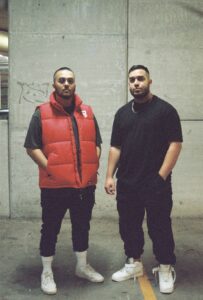 Shep.art and Barry Saleh above

The video starts off with Barry Saleh walking into an open bushland with a trophy in his hand, leaving the audience confused and wanting to learn what happens next. This trophy is ultimately thrown into a campfire that sparks the light in us both to keep moving forward without feeling the need to please and accommodate society. The symbolic nature of the friends shown in the video reference how people can be present in one’s life and don’t necessarily need to have a negative impact on the outcome of your dreams. Sheph.ART

With a string of production & song-writing credits under their belts, as well as a community that already recognises their name, Sheph.ART & Barry Saleh are poised to now nudge their faces & voices to the front of Australian hip-hop culture. ‘Action’ sets the tone for a slew of upcoming releases that are masterfully executed in flow, melody & production. The two powerhouses are not a flash in the pan, with an energy and purpose driving their future collaborations.

“It’s also not surprising that Sheph is on the up. As well as having the talent it takes, he’s working in a boom time for Australian producers”

“Past credits include production for the likes of A.Girl, Youngn Lipz, and Pistol Pete, and more than ten million streams for their combined outputs. ‘Action’ continues Sheph.ART and Barry Saleh’s preference for pairing smooth melodies with crisp beats, allowing the intricacies of the track to unfold throughout its two-and-a-half minute runtime.”

“Working out of the same studio, the Western Sydney artists know the formula it takes to make a hit song. Inspired by the likes of Kanye West and The Weeknd, ‘Action’ showcases their distinct melodies, polished production and powerful lyricism of self-actualisation.”

“Coulda sworn that lead vocal came from Abel! Lush package and the energy is way up”