A NEW ERA FOR

In a delirium of police lights and hallucinations, the BRIT and Grammy-winning virtual band Gorillaz ring in a new dawn, teaming up with Nexus Studios to create the epic psychedelic video for their summer banger ‘Cracker Island ft. Thundercat’.  Directed by artist and Gorillaz co-creator Jamie Hewlett and the Emmy nominated Nexus Studios director, Fx Goby, Cracker Island takes viewers on a late night journey into the City of Angels. Watch HERE.

Murdoc said – “Think of it as the final scene in the movie, the bit after the grand finale when the hero (me) is about to stride into the sunset, credits rolling. That’s right, we’re starting at the end. Why? COS I WORK IN MYSTERIOUS WAYS.”

This week, Gorillaz have been wowing crowds at sold out arenas in Melbourne, Sydney, and Adelaide with their first shows down-under in 12 years. To further celebrate this long awaited return to Australia, as well as the release of ‘Cracker Island’, fans will have the opportunity to visit the Gorillaz pop up store in Sydney, which will see Murdoc, Noodle, 2D and Russel take over 29 Australia Street in Camperdown – for one day only – this Saturday 30th July, from 9am – 5pm.

The pop up store will feature exclusive, never before seen merchandise and poster designs, as well as the sold-out tour range and a huge collection of merch, toys, accessories, box-sets, vinyl and more. As an added bonus, the first 100 entrants will receive a free Gorillaz face mask.

Originally based at Kong Studios in West London, the group of musical misfits – Murdoc, Noodle, Russel and 2D – have relocated to Silverlake, California as they recruit new members to join ‘The Last Cult’, in search of the one truth to fix the world. 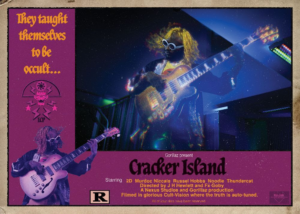 Created by musician Damon Albarn and artist Jamie Hewlett, Gorillaz is singer 2D, bassist Murdoc Niccals, drummer Russel Hobbs and Japanese guitar prodigy Noodle. The BRIT and Grammy-winning virtual band formed following a collision of mishaps, meetings and pure luck to blow up a pre-digital world with their colourful backstory and ground-breaking virtual ways. Based at Kong Studios in West London, Gorillaz settled into a life of musical innovation with an eye-wateringly exciting roster of collaborators, a list that includes musical legends, geniuses and future stars from Elton John to Little Simz, MF Doom to Jean-Michel Jarre, Grace Jones to slowthai, Kali Uchis to Sidiki Diabaté, plus so many more. With seven albums to their name, Gorillaz (2001), Demon Days (2005), Plastic Beach (2010), The Fall (2011), Humanz (2017), The Now Now (2018) and Song Machine: Season One – Strange Timez (2020), Gorillaz is a truly global phenomenon, achieving success in entirely new and unique ways, touring the world from San Diego to Syria, Montevideo to Manchester and winning numerous awards including the coveted Jim Henson Creativity Honor.

“...dance-floor-ready banger of a track…the summer anthem of this year.”

“…a sleek and summery jam…invites the listener to simply lock into its blissed-out groove.”

“… a groove made all the more golden by virtuoso bassist Thundercat”

“…the cartoon poppers are starting a cult in California, this jaunty tune will net some followers.”

“…a bustling blast of dance funk that tempers its slick, bass-heavy groove with plenty of grit and a touch of dark wave energy.”